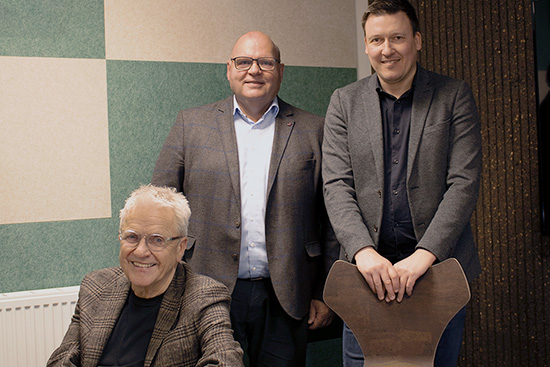 Svend Østergaard Pedersen, founder of the group we have been part of since 2002, is taking a step back, handing over the reins to the next generation and also bringing in a CEO from outside.

For more thatn two decades troels denmark has been part of the family-owned furniture business, Top-line A/S, and for more than 10 years it has been directed by the son of Top-line's founder, Bjarke Ø. Pedersen.

Today he is also the main shareholder in the group and he says the following about the choice of Claus S. Nørregaard: “We’ve had the opportunity to assess Claus a little, as he’s been CEO of our subsidiary Canett Furniture A/S for the past 2 years. It quickly became clear to us that he has all the qualities we need as a larger company going forward. Together with the rest of the management team, I’m absolutely convinced that we’ll take the company to new heights.”

His father and the outgoing CEO, Svend Ø. Pedersen, says: “Everything has its time, and having turned 70, I think the time has come for me to slow down a bit and, at the same time, task a strong team with continuing the positive development that the company has been undergoing for many years now. My son Bjarke and I believe we’ve found the right person to handle the day-to-day management of the group's many subsidiaries.”

Claus S. Nørgaard comes with more than 30 years of management experience, and for the past 15 years, he has been head of international furniture manufacturers with production and subsidiaries in both Denmark and Eastern Europe.

"Over the past few years, I’ve got to know Svend, Bjarke and the whole team in the Top-line Group, which is characterised by its strength and competitiveness as a producer as well as its sound corporate culture and healthy values, which match mine perfectly," says Claus S. Nørgaard. He continues: "I’m both honoured and humbled in respect of the responsibility and duty that comes with continuing what Svend and Bjarke have put all their focus and energy into building".

While Bjarke Ø. Pedersen will continue to have overall responsibility for the group's global sales, his father will take over the role of working chairman of the board. Svend Ø. Pedersen will therefore remain partly at the helm of a company that has become one of Scandinavia's leaders in quality affordable furniture, employing a total of 400 people in its five subsidiaries and at its two factories in Poland.